March for LRT to Malvern

Join us to demand better public transit for Malvern and Eastern Scarborough! We're marching to demand: 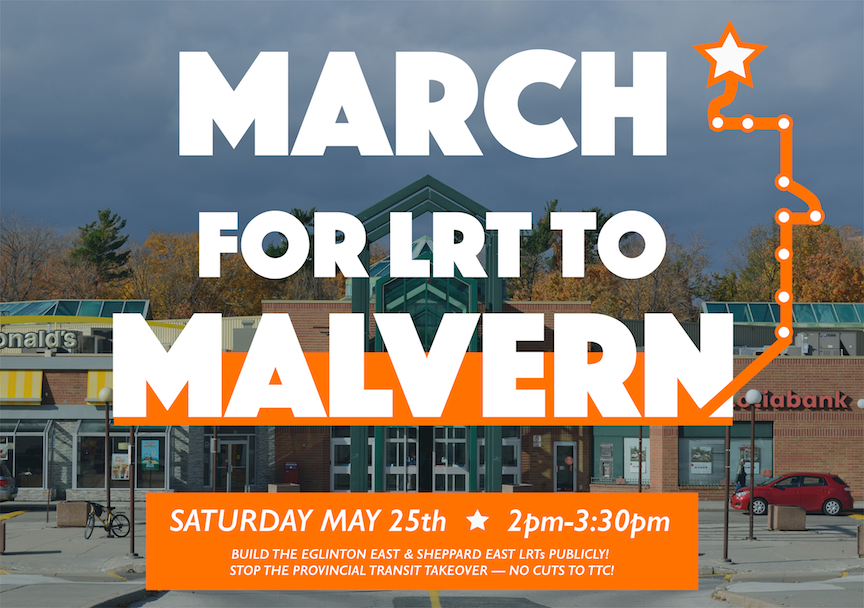 The provincial government is taking control of new TTC projects. But Eastern Scarborough has been left off the map. Our MPPs are cancelling the Eglinton East LRT to Malvern and UofT Scarborough that they promised to build. Let's hold them to their promise and make sure new transit lines are owned, operated, and maintained by the TTC, not privatized.

The province is cutting $1.1 billion to TTC operations and maintenance funding over the next 10 years, even though the TTC is the least funded system in North America. The provincial funding had already been allocated to important TTC maintenance work and accessibility upgrades. This will mean more delays and crowding, service cuts, and higher fares.

Join the March for Malvern to demand the fairly funded and accessible public transit system we need. Write to your MPP here: www.ttcriders.ca/oursubway

Questions? Want to get involved or endorse the march? Contact: [email protected]